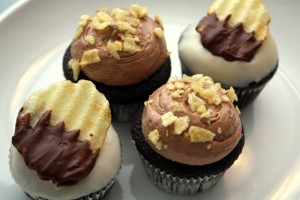 Hope everyone had a fun Super Bowl Sunday! The game ended on an exciting note . . . but of course you know I was only watching for the commercials, and for an excuse to bake more cupcakes.

These two cupcakes draw inspiration from Chuao Chocolatier again, this time from one of their newer flavors, the “Potato Chips in Chocolate” bar. This first cupcake is a simple chocolate cake. I tried to work with an even simpler recipe than my prior chocolate cupcakes, in case I ever needed to pull it together with basic ingredients, and I think this one worked out well enough. The frosting is a Swiss meringue milk chocolate buttercream frosting, topped with crushed potato chips and some added sea salt. Mildly sweet with a bit of crunch. 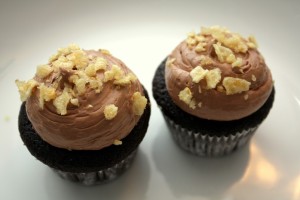 The second cupcake is a Guinness draught chocolate cake with a Guinness cream cheese glaze, topped with a potato chip dipped in milk chocolate. Because of the Guinness, this cake is a bit more bitter, but that makes for a nice contrast to the sweet glaze and salty-crunchy topping. 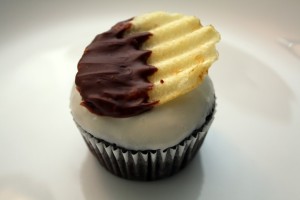