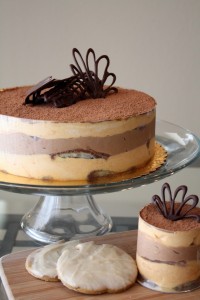 This three-layer tiramisu is a holiday variation of the traditional tiramisu, using pumpkin, chocolate and amaretto instead of espresso and rum. Based on a Cook’s Illustrated recipe, and inspired by a Martha Stewart recipe, the mascarpone layers are flavored with pumpkin puree, with the middle layer additionally flavored with melted chocolate. The ladyfingers are brushed/dipped with cocoa and amaretto. The top is dusted with cocoa and cinnamon, with chocolate decorations.

This recipe creates a very light and soft mascarpone layer. For a denser, thicker cake, use less whipping cream.

Unfortunately, the tiramisu did not survive heavy Thanksgiving road traffic and accidents. Fortunately, we made pumpkin cookies with brown butter icing as back-up!

UPDATE: I’ve been asked about my pumpkin cookie recipe, so here it is. I arrived at this recipe through experimentation after tweaking a couple other recipes. Hope it works well for you all!

For the icing (makes 1 cup) – from Martha Stewart: