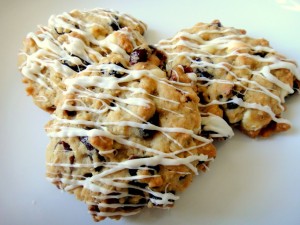 Oftentimes, recipes on the back of boxes / packages can be rather mediocre, having been dumbed down to be accessible to the general public. This one, however, despite its simplicity, is a home run. It’s quick and easy, and most people seem to love the taste, even if they are not particular fans of oatmeal cookies, craisins, or white chocolate.

Most of the sweetness and flavor for this cookie comes from the dried cranberries and white chocolate, so be liberal with those ingredients. In addition, note that these cookies expand very little in the oven. I would flatten them slightly before baking. No need to worry about the cookies running into each other as they bake.