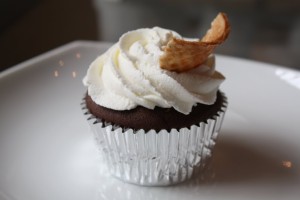 I filled these chocolate butter cupcakes with hazelnut ganache, and topped with whipped cream with a hint of hazelnut. Finally, a piece of sugar cone, because who doesn’t like ice cream cones?