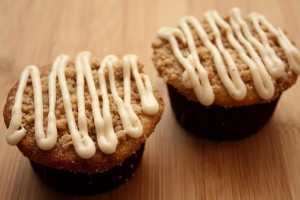 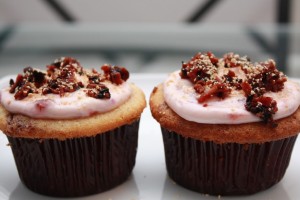 These cupcakes are inspired by Hollis Wilder from Cupcake Wars. I love her ideas, and love that she brings her culinary experience to the pastry world. The cake is a cinnamon swirl sour cream cake, that is moist and fluffy, and much like a coffee cake. The key to the pop of cinnamon flavor is to fold in a brown sugar-cinnamon mixture, without fully blending. See swirls below. 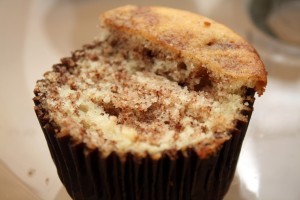 The frosting is a strawberry cream cheese with maple butter, and the topping is maple-glazed turkey bacon, with maple sugar sprinkled on top. Maple butter and maple sugar are pretty amazing (but pricey)—check your local health food store to find those items! 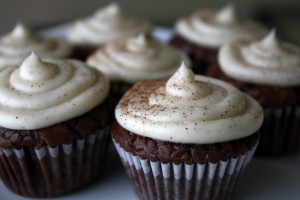 I discovered spicy Mayan hot chocolate at Coupa Cafe in Palo Alto and have loved that spiced up chocolate flavor ever since. When we moved to San Diego, we found out that Chuao Chocolatier, which supplies their chocolate bonbons and hot chocolates to Coupa Cafe, is based here! I was over the moon—an endless supply of spicy chocolate (and other favorites like Firecracker and Panko). Of course, it’s a pricey supply, so for Cinco de Mayo, I decided to make Mexican brownies from scratch.

I am sure there are a variety of spices that can be added, but here’s a simple way to get the job done:

Take your standard chocolate brownie recipe (a box mix works too) and add about 3/4 tsp. of ground chipotle chili pepper and 1 tsp. of ground cinnamon. I baked these as mini cupcakes, which requires about 18-20 minutes in the oven at 350 degrees, and topped with cinnamon buttercream. Avoid overbaking, since that seems to bake off the spice flavors.