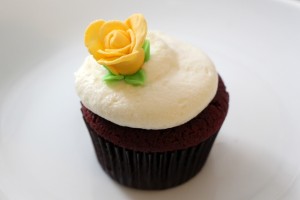 It’s homecoming weekend! For a reunion potluck with my syzsters, I made these red velvet cupcakes, filled with lemon curd and topped with lemon cream cheese frosting and a gumpaste yellow rose, as a nod to our sorority colors of red and gold.

I’ve actually never made red velvet cupcakes before, so I decided to try out two recipes, one from Cook’s Illustrated (which I can almost always count on), and one from the Hummingbird Bakery Cookbook (via Joy the Baker). Neither blew me away, as I thought both were slightly dry and not particularly flavorful on their own. Although both held up well and tasted great once assembled with the frosting and curd, I think a good cake should stand on its own. 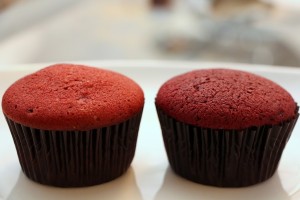 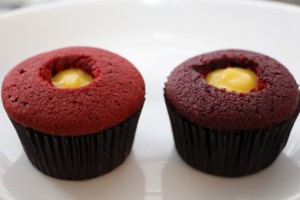 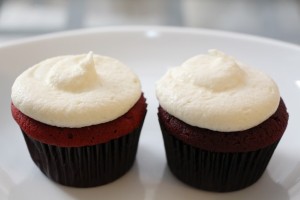 Initially, out of the oven, I liked the Hummingbird recipe better, because it used more cocoa and food coloring, resulting in a deeper red color and a stronger chocolate flavor. But once the cupcakes were assembled and sat overnight, I thought the Cook’s Illustrated recipe was more balanced. The Hummingbird recipe had a little too much cocoa, such that the cake tasted more like a chocolate cake (which, unless you are mixing in melted chocolate into the recipe, often has a slightly bitter aftertaste), and was overpowering the lemon and cream cheese flavors.

In the future, I hope to tinker with a oil-based recipe, rather than a butter-based one, as I generally prefer the texture and moistness of oil cakes (at least for cupcakes). Will update if I succeed there!

For the lemon cream cheese frosting, beat together 1 cup (2 sticks) unsalted butter, 12 oz. cream cheese, 1 lb. (4 cups) confectioners’ sugar, ¾ teaspoon vanilla extract, and the juice from one lemon (to taste, about 2-3 tablespoons). Note: the acidity from the lemon juice may slightly break up the consistency of the frosting, so don’t make this too far in advance.

For the lemon curd, combine 2 whole eggs, 8 egg yolks, 1 cup sugar, and ⅔ cup lemon juice in a heatproof bowl set over a saucepan of simmer water. Cook and whisk constantly until the mixture is thick enough to coat the back of a spoon. Remove from heat and add 2 tablespoons unsalted butter, whisking until smooth. Strain the mixture through a sieve into a small bowl to remove lumps. Cover with plastic wrap, pressing the wrap against the surface to prevent a skin from forming. Refrigerate until chilled and firm, at least 2 hours (or up to 2 days).