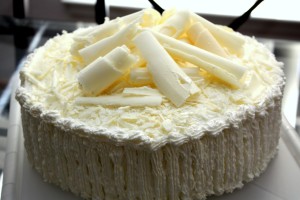 This is a 10″ cake, with sour cream pound cake layers, brushed with vanilla simple syrup. In between the layers are white chocolate sour cream mousse, fresh whipped cream, and berries. I only used strawberries and blackberries in my cake, but I think any combination would work. The decoration is white chocolate shavings and curls.

I’m not sure the recipe for mousse in the cookbook quite worked. For a better mousse consistency, I suggest the following:

I played with this while in-process, so the measurements may not be exact, particularly with respect to the whipped cream addition. I think that part can be made to-taste and to-texture, depending on what consistency and level of sweetness you are aiming for. The important addition here to the cookbook is the whipped egg yolk base, which gives the mousse a sturdier structure that won’t run. 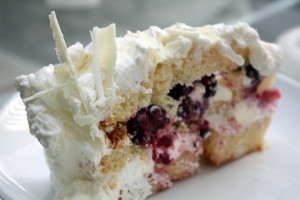 I had previously attempted this in cupcake form, but because this cake relies on being soaked in vanilla simple syrup, and having almost as much (or perhaps more) mousse and whipped cream than cake, I don’t think the cupcake form delivers the same texture and flavor. Not to mention, I also dropped my entire batch of cupcakes before delivering them to a potluck event, so it is not quite a happy memory. One day, I will post a collage of all my disasters (usually in transit), when it doesn’t pain me so much to think about it!

Yellow roses for my SYZters: 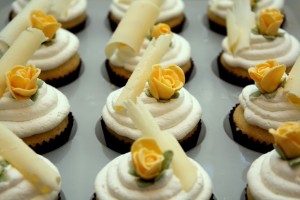